What is the best Batman film of all time?

From Adam West to Ben Affleck, there have been six men to inhabit the Batcave on the big screen.

For a time, it appeared as if Batman could have been James Bond – played by different actors in films by different directors with varying results – but that is far less likely in a world in which every studio is longing to make their own Marvel-esque universe.

So let’s rank them worst to first.

These rankings are based on the full film not just the character, and exclude group films like Justice League, cameos like Suicide Squad, and animated films (Mask of the Phantasm; The Killing Joke; Lego Batman; The Animated Series; etc.).

Disclaimer: these are only my personal rankings and I imagine many are at odds with critical and even popular opinion. 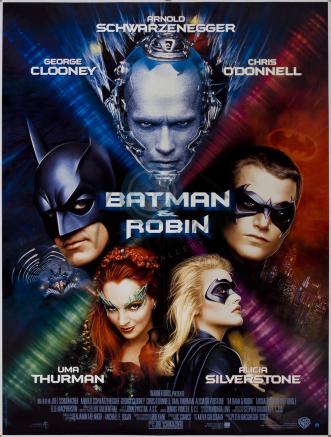 Little more than a two hour toy commercial, it’s hard to find a single redeeming quality in Batman & Robin. In the late ’90s, films based on comic books were not treated with any sort of seriousness and were instead aimed squarely at children. George Clooney had yet to transition from television to films, but he still does as much as he can with a script that was probably written on a napkin by the Warner Bros. marketing department.

I understand that the campiness was deliberate and the over-the-top performances, most especially Adam West’s, were certainly admirable, I just don’t have the nostalgia and warm feelings for Batman ’66 that so many others do. It’s good for what it is, but personally I prefer my Batman flicks to have a much stronger basis in reality.

After having to deal with studio notes and producer intervention, Tim Burton insisted he would only return for a sequel if he were given creative control and, considering the success of Batman, it was given to him. The result is an $80 million student art film that is largely plotless, takes place entirely on a movie set, and is far worse than you may remember. The movie focuses on the villains, but their origins are ridiculous – Catwoman is born after falling from a window, then spray painting a doll house and putting stuffed animals in the garbage disposal while the Pengiun is characterized as an infantile circus sideshow that is on the hunt for both “poontang” and public office. Burton’s control of the second film led to his removal from the third. 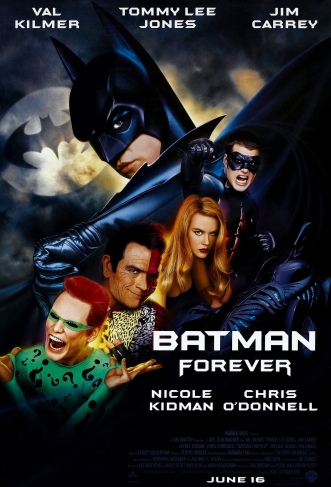 Following the reaction to the creepy Batman Returns, WB decided to lighten up the tone by bringing in Joel Schumacher in place of Burton. As a result, Michael Keaton chose not to return, leaving Val Kilmer to don the cape and cowl, creating a completely new approach to the films. Whereas Burton was focused on the villains, Batman Forever is the first film of the ’80s/’90s to place its story on Bruce Wayne but, ironically, it’s Jim Carrey’s turn as the Riddler (and his incredible cane work), as well as a few decent action scenes, that save the film from the garish neon, Tommy Lee Jones’s one-note performance as Two-Face, and the ripoff of the Superman-Lois Lane-Clark Kent love triangle.

The first Batman film of the new era, Tim Burton’s seminal 1989 film was lauded at the time time for its dark tone and serious handling of the character and the material, though that is hard to believe when viewing the film today. There are elements that are goofy and don’t really work – and just like with Batman Returns, it all takes place on a set and the story revolves around the villain rather than the hero (the only origin story we don’t see in either film is Batman’s) – but the film is carried by Jack Nicholson’s iconic performance as the Joker and bolstered by the look of the film and Prince’s soundtrack. Some of it no longer holds up, but much of it does.

There are several difficulties in completing the final film of a trilogy, most notably (a) raising the stakes beyond the previous two, and (b) bringing the saga full circle by referencing the first film. For Christopher Nolan, this was made even more difficult because the second film of his trilogy was so great. Matching it would have been nearly impossible, let alone topping it. At times, it comes close with certain iconic scenes (the plane at the beginning; the football stadium; the bat symbol on fire on the bridge) and performances. Tom Hardy brought a realistic sinisterism to Bane, a character that was an almost ridiculous larger than life beast on the page and Anne Hathaway’s Catwoman exceeded everyone’s expectations and is the best depiction of the character ever on screen. Yet the film has some gaping plot holes and its basic conceit is flawed because Batman would never quit being Batman, particularly after seemingly only a few weeks on the job (if we’re going by Batman Begins and The Dark Knight). It’s the weakest film of the trilogy, but still better than most.

One of the most divisive films in recent years, Batman v Superman was savaged by critics but beloved by many fans, particularly those that appreciated the homages and direct references to the source material.

While I can recognize the film’s flaws – many of the same ones that have plagued the DCEU since its inception – I absolutely loved the film and appreciated the dark, gritty tone and realistic approach of how we as a society would react to a real life Superman coming to our planet that would force us to question both our control of the planet and our knowledge of the universe. I found all of the new Batman touches – the new Batcave, Alfred serving as a mechanic and military assistant rather than simply butler, a modest home rather than Wayne Manor – to be improvements to the mythos of the films. Plus, Ben Affleck is a fantastic Batman. 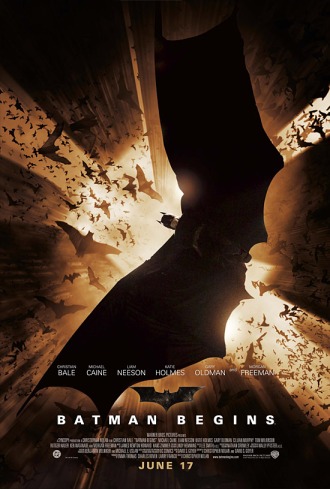 After the catastrophe of Batman & Robin, Warner Bros. cancelled Joel Schumacher’s third film in the franchise and stopped making superhero films for a while. When they finally did decide to re-up, they wanted to make something much more realistic, first considering Darren Aronofsky’s adaptation of Year One before ultimately handing the reins over to Christopher Nolan. Possibly the most realistic comic book film ever, it goes to great lengths to explain, answer, and rationalize any question someone may have to the plausibility of it all. It occasionally struggles under the weight of being both an origin story and a reboot, but as soon as the first teaser trailer arrived in 2004, we knew that a new Batman era had arrived.

A tight script. Dazzling IMAX visuals. Even an Oscar-winning performance as the Joker. The Dark Knight is as good as it gets, a nearly flawless masterpiece in all aspects of film that takes the next step from Batman Begins as Christian Bale’s Bruce Wayne becomes more of a detective as he tries to prevent Gotham City from descending into chaos. There are so many gripping scenes that it’s hard to pick a favorite. There will probably be Batman films for the next fifty years, but it will be difficult to surpass the middle film of Christopher Nolan’s Dark Knight trilogy.

This article contains Amazon affiliate links. Any click may result in my receiving a commission.