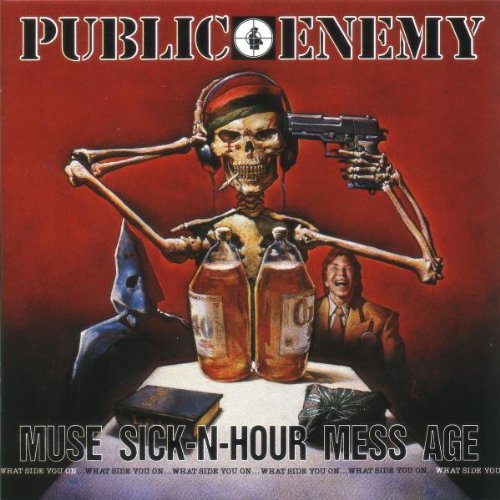 It is difficult to overstate the importance of Public Enemy. The architects of four powerful, groundbreaking albums from 1987 to 1991, including what many (myself included) believe is the greatest hip-hop album of all time, Chuck D, Flavor Flav, and company created politically-charged, aggressive, sonically-stunning, suped-up hip-hop music that spoke truth to power and shined a light on the plights of the black community.  Chuck D, along with Rakim, KRS-One, and the other greats of the late 1980s, was instrumental in rap rhymes becoming more nuanced and complex.

But by 1994, hip-hop had shifted yet again, and the genre’s focus on Afrocentrism and black power was being replaced by vivid street tales and boastful raps from newcomers hailing from all over the map, from Snoop Doggy Dogg to Nas, The Notorious B.I.G. to Common, Outkast to MC Eiht.

It was into this atmosphere that PE’s fifth album, Muse Sick-N-Hour Mess Age, was released. After taking time off from recording to tour with U2 and then to allow Flav to try to kick drugs and clean up his legal mess, they returned to the studio and, in the words of Chuck D:

The public, and at least some critics, didn’t want something different. While some, like Robert Christgau, Spin, and NME, praised the album, others, including Rolling Stone and The Source, were much more critical. It also underperformed commercially, peaking at number 14 on the Billboard chart and attaining only gold status after three consecutive platinum plaques.

It was the beginning of the end for Public Enemy’s relevance atop the culture, but the album has been praised by various writers and outlets in recent years. Was PE ahead of its time? I haven’t listened to the album since ’94, so let’s give it a fresh spin. 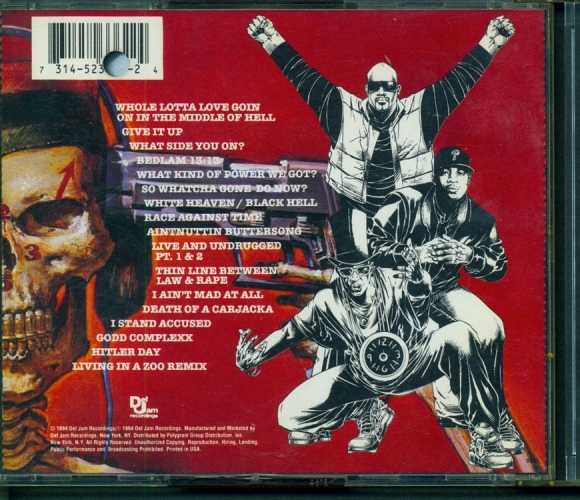 The album is a bit disjointed. All of the vintage PE elements are there – Chuck D’s fiery rhymes, Flavor Flav’s ad-libs, the Bomb Squad’s frenetic production – but they just don’t always mesh like they had on the group’s earlier projects.

Yet it’s unfair to compare anyone with the run that Public Enemy had at the start of their career, even the group itself. And that also shortchanges this album because while it’s not the group’s best, it is significantly better than it was given credit for upon its release. The first half of the album is strong and while not as inspired as It Takes a Nation of Millions or even Fear of a Black Planet, it continues the group’s legacy. In fact, parts of it, most especially “Bedlam 13:13” and “Race Against Time” would have sounded right at home on Apocalypse ’91.

While the group’s early work is lauded for its message-driven content, Muse Sick-N-Hour Mess Age may be their most political work overall. A quick perusal of the tracklist conveys this, as song titles like “White Heaven/Black Hell,” “What Kind of Power We Got?,” and “I Stand Accused” prove that time has not softened their message. The most powerful of these, “Thin Line Between Law & Rape,” addresses how the raping of everything – women, land, culture, beliefs – was allowed in the name of imperialism and colonization.

Despite Chuck D’s insistence that he would not change with the times, the first single, “Give It Up,” actually did switch up the group’s sound a bit and was more similar in pace and tone to much of the rest of the genre in ’94. Perhaps that’s a major reason that it became the group’s highest charting single.

But while the disc has aged well, it does certainly have its low points.

The album’s biggest problem is the length. Twenty-one tracks, especially at this level of intensity, is just too many. The weak cuts, like “Hitler Day,” sound more rote than rousing and pop up on the back half of the album. That could be due to listener fatigue – every song is so desperate to get the audience to wake up and pay attention – but that is also where they were slotted.

The Bomb Squad, which previously layered sample upon sample for Chuck and Flav to immerse themselves in, now tried to incorporate more background vocals and live instrumentation, the results of which vary, but rarely pack the power of previous projects. Even more troubling, Chuck D had lost a step by 1994. His voice was still a weapon and the lyrics were still ardent, but throughout Muse Sick there are moments where he struggles to keep up with the beat, occasionally even abandoning rhyming completely to ensure that his point gets across.

For the first time in their legendary career, Public Enemy had sacrificed art in favor of message.

Tha Doggfather | Blood in My Eye | The Best of Both Worlds | Can-I-Bus | Beats, Rhymes and Life | Encore | Immobilarity | 14 Shots to the Dome | Forever | Christmas on Death Row | Double Up | The New Danger | A Better Tomorrow | Back from Hell | For All Seasons | Welcome to: Our House | Blood Money | Til the Casket Drops | Yeezus | Nastradamus | Blunted on Reality | Money, Power & Respect | Asleep in the Bread Aisle