In the spring of 2002, there came a song with a sparse, backbreaking beat that immediately induced Pavlovian head nodding. As Pharrell introduced himself and proclaimed that “The world is about to hear something that they never heard before,” another voice kept chanting “I’m your pusha!”

This is how most people were introduced to Clipse.

Over the next seven years, brothers Pusha T and Malice would prove themselves to be coke rap extraordinaires, dropping their stellar debut, Lord Willin’, the oft-delayed, but worth the wait follow-up Hell Hath No Fury, and three volumes of their street-loved mixtape series Got It 4 Cheap while also appearing on songs with artists as varied as Justin Timberlake and Kardinal Offishal.

But for all of its critical acclaim, Hell Hath No Fury failed to match the success of their debut – only reaching number 14 on the Billboard 200 as opposed to Lord Willin’ peaking at four – so the duo decided to try to reach a wider audience on their third time up at the plate. That meant straying from the winning formula of showing off their skills solely over crisp Neptunes production. It was a curious decision, not only because the two camps obviously merged together beautifully, but also because it’s hard to imagine any producers having more luck striking gold than the Neptunes. They’re kingmakers.

They would go their separate ways. Pusha would sign to Kanye West’s G.O.O.D. Music and develop a solo career while his brother released an album of his own under his new moniker of No Malice and would focus his time and energy on giving his life to God.

Til the Casket Drops is the last Clipse album – maybe ever – so what did they leave us with? 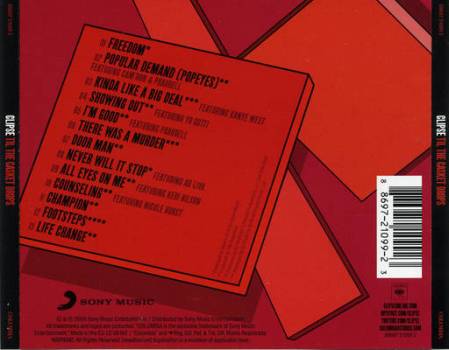 A confusing mishmash of lyrics and sounds that fail to coalesce into anything beyond individual songs. When your mixtapes, which featured your two supporting artists, have more sound less disjointed than your album, it’s a bad sign.

The album starts out promising. “Popular Demand [Popeyes]” belongs in the conversation of best Clipse songs, with a knocking Neptunes beat, a catchy hook from Skateboard P, and one of Pusha’s best verses, as well as verse from Cam’Ron that sounds great even if repeated listens prove that he’s not really saying much.

“Kinda Like a Big Deal” is also dope, complete with a fun, College Dropout-era performance from Kanye and Pusha and Malice sounding as engaged as ever. But the fact that these two songs come back to back at tracks two and three lead to a long slide for the rest of the album.

At first, it’s easy to blame the outside production. Five of the thirteen tracks come from individuals not named Pharrell or Chad – DJ Khalil produces or co-produces three and a couple of Diddy’s Hitmen, Sean C and LV, supply the other two – and when the opening track features Clipse spitting over guitars, it seems like too many hands in the kitchen is the issue.

But “Kinda Like a Big Deal” comes from Khalil and “Never Will It Stop,” another bright spot reminiscent of prior Clipse cuts, is courtesy of Sean C and LV. Additionally, the Neptunes don’t bring their best, either. While overly relying on synthesizers, they also recycle sounds from other late 2000s beats. “Door Man” sounds a lot like Wale’s “Let It Loose” and “I’m Good” is like a blend of two beats they provided for Jay-Z – “I Know” and “So Ambitious.”

The overall tone of the album is upbeat. Unlike Hell Hath No Fury, which had been made in the throes of anger and despair, Push and Malice had a much healthier mind state here, which combined with their attempt to reach more fans combined to create more upbeat, less street-obsessed rhymes.

And it doesn’t really work for them.

Previously, their club or radio singles, such as the top 20 charting “When the Last Time,” were still uniquely Clipse tracks. Here, that feeling is gone. “All Eyes on Me” sounds like a generic late ’90s Bad Boy reach for radio play and “Counseling” is as bad as anything a struggle rapper has put on YouTube, evidenced by an atrocious hook and Pusha’s cringe-worthy verse that includes: “I used to be all about a fat ass/Then I found a cutie with a flat ass/Good head, nice smile but her flat ass/Two out of three, shit I couldn’t let that pass.” Eghck indeed.

It may sound sacrilegious, but Clipse struggle when they’re not spitting coke raps. There’s no real artistic direction and half the time they’re not even sure what point they’re trying to make. On his two excellent solo albums, Pusha has managed to balance bragging about the drug game while also recognizing – and wrestling with – what it does to others, but here both he and Malice simply vacillate between passing kingpin boasts and attempts to be emotive without really digging deep. It all adds up to an inconsistent, incoherent project.

It’s a shame that this is the final album in the Clipse catalog because they have proven they can do far better than this.

Hopefully one day they’ll reunite and make up for it.

Tha Doggfather | Blood in My Eye | The Best of Both Worlds | Can-I-Bus | Beats, Rhymes and Life | Encore | Immobilarity | 14 Shots to the Dome | Forever | Christmas on Death Row | Double Up | The New Danger | A Better Tomorrow | Back from Hell | For All Seasons | Welcome to: Our House | Blood Money