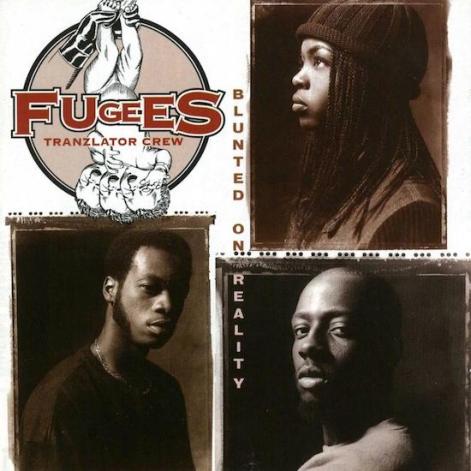 One of the biggest albums of 1996 was The Score, the sophomore album from a New Jersey group by the name of Fugees. While they seemed to come out of nowhere, the trio of Wyclef Jean, Lauryn Hill, and Pras had actually been around for several years and had already released a major label album to their name.

They had started around 1990 under the name Tranzlator Crew and had signed to Ruffhouse. The majority of their debut album had been recorded in 1992 while Lauryn Hill was distracted with filming Sister Act 2: Back in the Habit, but it was not released until 1994. Thus, Blunted on Reality entered a hip-hop landscape that sounded far different than it had two years earlier.

The young, upstart trio immediately sounded dated and out of touch. The poor sales and tepid critical reception almost led to the dissolution of the group.

One of the things that people who are constantly clamoring for a Fugees reunion often forget is that Lauryn Hill always had always had one foot out of the group: “Her on-again/off-again membership in the Fugees began at the age of 13, but was often interrupted by both the acting gigs and her enrollment at Columbia University. After developing a following in the tri-state area, the group’s first release – the much-hyped but uneven 1994 album Blunted on Reality – bombed, and almost caused a breakup.”

Of course, the three not only stayed together, but managed to find their unique voices and identities and came back with the chart-topping, Grammy-winning The Score two years later before going their separate ways.

Now that we know what happened with the Fugees, both collectively and individually, does Blunted on Reality sound any different than it did when it was released on February 1, 1994?

On their debut, the Fugees appeared to be just another group in the vein of Lords of the Underground, Das EFX, Fu-Schnickens, and many other early ’90s crews with their rapid drums, shouted call-and-response hooks, and super fast, occasionally tongue-twisting flows. There is nothing to separates them, either from other acts of the time, or even from one another.

A major element that made The Score popular – and great – is that it went to great lengths to showcase each member’s talent, such as the solo cover songs by Lauryn (“Killing Me Softly”) and Wyclef (“No Woman, No Cry”). That element is sorely missing from Blunted on Reality. Many of the songs run together because the beats are generic boom bap and most of them sound so similar and many keep the same frantic pace.

The production is the album’s biggest issue, but it’s not the only one.

Even when the sounds change, the group does not respond accordingly. “Vocab” eschews drums and all production in exchange for the strumming of a singular guitar (a preview of sorts of what was to come in ’96), but the three barely slow down, keeping their energy and delivery all the way dialed up, which creates a disconnect with the backdrop and results in an uneasy listening experience.

Similarly, “Temple” has a refreshing dancehall-inspired beat, but while Lauryn comes closest to matching the tempo, none of them properly ride the beat. Wyclef sounds like his vocals were taken from a different song entirely and laid on top of this one.

It would be easy to say that the lyrics also pale in comparison to their later work and it’s true that there is more rap just for the sake of rap and less of an attempt to deliver a message, but the truth is that the words fly by or are buried beneath all of the other noise that they often get lost. On “Recharge,” Lauryn ends her verse with “Start the revolution with the Tranzlator Crew,” but the rest of the verse is all over the place and lacks a cohesive direction. There are hints of elements and intentions throughout, but they never really amount to much lyrically.

The first track after the intro, “Nappy Heads,” is the album’s second single and the only one to reach the Billboard Hot 100. Musically, it sounds like Big Daddy Kane’s “Young, Gifted and Black” mixed with a Pete Rock-copycat. It’s not bad, but it’s nothing we hadn’t heard hundreds of times before.

Which makes the Salaam Remi-produced remix that closes the disc such a welcome surprise. Featuring Wyclef’s harmonizing, Lauryn’s easy flow with a bit of singing within it, and Pras’s straightforward delivery in a way that is upbeat but not frenetic, it shows the growth and evolution of the group. That song represents the bridge between Blunted on Reality and The Score.

The album begins with Wyclef responding to what sounds like an evil deity in some dystopian future, screaming that the year is 2017, which sounded like the far distant future back in the early ’90s.

It’s a fitting a prophetic introduction because Blunted on Reality was an album that never fit with the times.

Tha Doggfather | Blood in My Eye | The Best of Both Worlds | Can-I-Bus | Beats, Rhymes and Life | Encore | Immobilarity | 14 Shots to the Dome | Forever | Christmas on Death Row | Double Up | The New Danger | A Better Tomorrow | Back from Hell | For All Seasons | Welcome to: Our House | Blood Money | Til the Casket Drops | Yeezus | Nastradamus