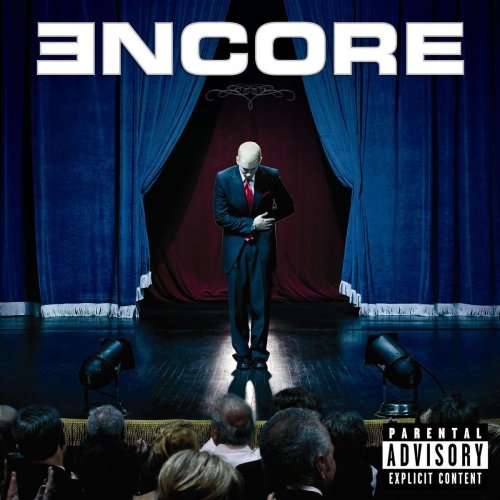 By 2004, Eminem was at the height of his fame and notoriety. Over the previous four years, he had released two Grammy-winning, RIAA-certified diamond albums (at least 10 million copies sold in the U.S. alone) and starred in a commercially and critically successful film loosely based on his own life and also executive produced its soundtrack, which included one of the greatest hip-hop songs in history, one for which he won an Academy Award (“Lose Yourself”). He had also become a label head, founding Shady Records and overseeing releases from D12, Obie Trice, and rap’s newest superstar, 50 Cent.

But he was fighting his demons and losing. He was a drug addict and struggling with his status as a superstar. He blamed his pop fans and TRL for making people forget that he had come up in the underground battling rappers (although he hadn’t been complaining when he appeared on the show repeatedly, helping his albums to fly off the shelves and concerts to be sold out worldwide).

Not only am I a fan of Eminem, I consider him a genius, one of the greatest MC’s ever. But I remember being appalled when I heard Encore. This was going to be his goodbye album? He was leaving this as his legacy? I haven’t listened to Encore in years, but the 11th anniversary of its release just passed, so I decided to give it another spin. 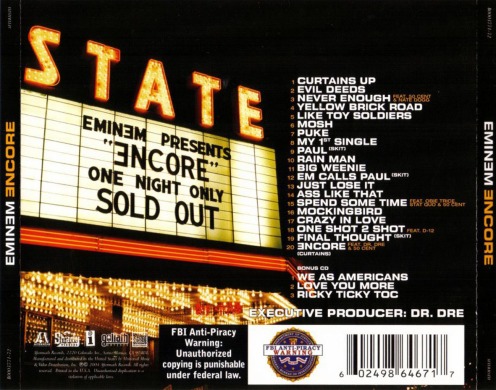 The album starts out kinda strong. “Evil Deeds,” the first song after the perfunctory intro, isn’t amazing, but it’s also not bad. Although at first it appears to be just another song of Slim Shady saying crazy shit, Em actually touches on every subject that most people knew about him, from his childhood to his place in hip-hop to his whiteness to his struggles with fame.

The next three songs are all great. “Never Enough” is an absolute gem with Em and 50 flowing over a Dr. Dre beat with a hook from Nate Dogg. This is one of the few instances in hip-hop in which a song actually matches expectations. “Yellow Brick Road” and “Like Toy Soldiers” both have depth and emotion – the first finds Em explaining his love for rap as an adolescent and addressing that racist tape while on the second he lists the myriad of beefs in which he’s been involved and pleads for non-violence.

Then, as now, it felt like Eminem had turned a corner after “Lose Yourself” and 8 Mile and was now going to leave the shock value behind. While “Mosh” isn’t a great song (even though I agree with its message), it’s still pretty jarring to hear the man that had impersonated Bill Clinton getting blown in his first video now making a genuine political statement. After six tracks, Encore was looking pretty good.

That’s when the album falls apart. Lazy lyrics, juvenile attempts at humor, halfhearted name-calling, and gibberish rhymes fill most of the LP. For much of the next hour it sounds like a parody of an Eminem album and feels completely at odds with the first few songs. He’s shown that his dysfunctional relationship can lead to great music like on “’97 Bonnie & Clyde,” but on “Puke” he’s just screaming at Kim in a cadence. “Just Lose It” is the third iteration of the project’s first single that sounds like nothing else on the album (see also “The Real Slim Shady” and “Without Me” from the previous two albums) and the shtick is so tired (but one he would sadly revisit again on Relapse). “Ass Like That” has an irresistible beat and a chorus that is so catchy that it gets stuck in your head even if you don’t want it to.  He then tries his hand at satire – on “Rain Man” he tries to make a statement about censorship and on “Big Weenie” he tries to prove his abilities by rapping the way Benzino claims he raps. Both attempts fail and two killer Dre beats are just wasted. For example:

“But who’s to say, what’s fair to say/And what not to say/Let’s ask Dr. Dre (What up?)/Dr. Dre, I got a question if I may (Yeah)/Is it gay to play putt-putt golf with a friend (Yeah)/And watch his butt butt when he tees off (Yeah)/But uh, I ain’t done yet/In football the quarterback yells out ‘hut-hut’/While he reaches in another grown man’s ass/Grabs on his nuts but just what if/It was never meant, it was just an accident/But he tripped fell slipped and his penis went in/His teeny tiny little round hiney and he didn’t mean it/But his little weenie flinched just a little bit/And I don’t need to go into any more details but/What if he pictured it as a female’s butt/Is that gay/I just need to clear things up/’Til then I’ll just walk around with a manly strut…”

Come on. Satire doesn’t automatically make something good. This is just wrapping the issue of censorship around rhymes that a struggle rapper wouldn’t even spit.

Encore is an album made by an artist that is bored – bored of music, bored of celebrity, bored of answering questions, bored of touring, bored of drugs, bored of life. It follows the same tropes as the previous two albums (including the skits and song order) and I wonder if, between that and the title and the cover image, Em knew it was a copy and, though his heart wasn’t in it, he wanted to see what he could get away with, treating it almost like an art project.

Including the bonus disc, there are 23 tracks on the album. That’s just way too many, particularly since it’s hard to find more than five decent songs. The beats are by far the strongest aspect – half of the beats are handled by Dr. Dre and Mike Elizondo with the other half coming courtesy of Eminem himself and Luis Resto – but they largely go to waste. There are moments of brilliance, but they’re few and far between and completely buried under the nonsense. We all know Em can flow in his sleep and that’s exactly what this sounds like.

In hindsight, knowing all that we know now, Encore is a fascinating look at an artist that has reached the top and is struggling with what comes next, both personally and professionally. It provides insight into the wages of fame and fortune and how drugs can ruin the artistic process.

Tha Doggfather | Blood in My Eye | The Best of Both Worlds | Can-I-Bus | Beats, Rhymes and Life