To become good in the NBA, you almost always have to become bad.

Those of us that really follow the league and understand its complexities – rather than basing our opinions on points per game averages and name recognition – always knew this. We knew that hovering around .500 and drafting in the middle of the first round would only result in more mediocrity, an unending cycle of boring basketball and wasted opportunity in which your only goal is to snag the eighth-seed so that you can serve as an appetizer for the conference’s top team.

That’s why I supported Sam Hinkie’s Process from the beginning.

Tanking is not new.

The NBA Draft Lottery was instituted because a year after drafting first overall in 1983, the Houston Rockets played their scrubs and went 9 – 27 in their final 36 games to also land the top choice the following year. The San Antonio Spurs and Boston Celtics raced to the bottom in an attempt to draft Tim Duncan in 1997. The Cleveland Cavaliers did it so that they’d land one of the coveted prospects in 2003. Even that franchise that claims to be “light-years ahead of probably every other team,” the Golden StateWarriors did it in 2012 so that they could keep their protected first round pick. More recently, the Lakers have done it as a bridge to their post-Kobe Bryant future.

Hell, the Sixers weren’t even the first ones to admit they were doing it. They just admitted that it would take longer than a year and that they wouldn’t even put on a charade that they were trying to win.

And that was Sam Hinkie’s biggest sin. Because in the NBA, you can be incompetent like the Sacramento Kings. And you can be corrupt like Donald Sterling’s Clippers for decades. You can’t just be honest about gaming the system.

Winning in the NBA takes patience. It takes patience during the season – resting players in January allows them to be fresh in May – but it also takes patience over several seasons. Patience and long-term vision are in short supply, particularly in sports, but the seeds that Hinkie spent years planting and cultivating are only now beginning to sprout.

None more so than the man who has embraced “The Process” to such a degree that it has become his nickname, franchise-saving, league-altering phenom Joell Embiid:

Hinkie didn’t roll the dice on an Andrew Bynum– or Dwight Howard–level prospect; he gambled on a Duncan, a Hakeem, a Shaq. Joel Embiid is the type of big man found on almost every dynasty in league history, and he has the potential to not only lead the Sixers, but to change the NBA.

In addition to Embiid, the Sixers have Dario Saric, Jahlil Okafor, and number one pick Ben Simmons. You want draft picks? Well, they have the option to swap spots with the Sacramento Kings in 2017; they also get the Lakers’ 2017 pick if it falls out of the top three; and they also get the Kings’ unprotected 2019 choice. All of those assets were acquired by Sam Hinkie. 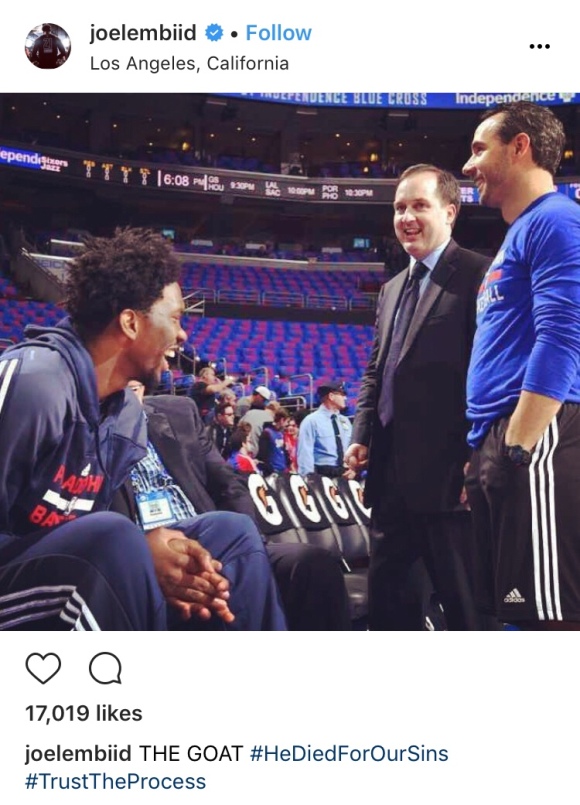 He may have been forced out and replaced by a guy that still needs his dad’s help to get a job, but Hinkie supplied Sixers fans with something they’d rarely had in two decades: hope. “For a brief stretch of my life, I felt empowered to dream about what the Sixers could be, rather than miserable and nihilist about the basketball franchise I’ve followed my entire life.”

Christopher Pierznik’s eight books are available in paperback and Kindle. His work has appeared on XXL, Cuepoint, Business Insider, The Cauldron, Medium, Fatherly, Hip Hop Golden Age, and many more. Subscribe to his monthly reading review newsletter or follow him on Facebook or Twitter.