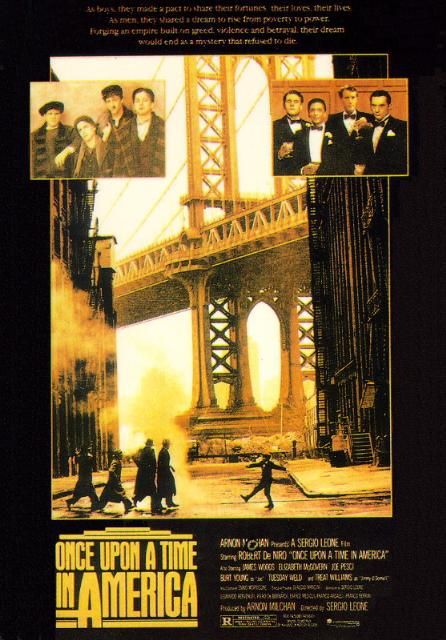 “This was a murdered movie.“

So begins Roger Ebert’s home video review of Once Upon a Time in America, the final film from legendary director Sergio Leone.

Originally planned to be a monumental six-hours that would be released in two parts, the film’s producers convinced Leone to cut it to four hours and 29 minutes. It was once again shortened to three hours and 49 minutes and when that version premiered at the 1984 Cannes Film Festival, it received a fifteen minute standing ovation. However, for the American release, the producers took a hatchet to the film, butchering it to a length of two hours and 19 minutes and rearranging scenes into a confounding mess. As Ebert wrote, “I defy anyone to understand the plot of the short version.”

It wasn’t just the film itself that had been murdered – it had also contributed to its creator’s death. Leone’s health had deteriorated during the making of the movie and he died in 1989, the masterwork of his legendary career castrated and left in tatters.

“The Four Horsemen of the Apocalypse“

The story of four poor Jewish kids from the Lower East Side in the 1920s that make a pact and become a gang, their operation expanding thanks largely to bootlegging, the film spans more than four decades and hops around in time, Leone using clever devices to flash back and flash forward between scenes.

It’s a gangster film, but it doesn’t glorify organized crime and makes plain what other films only hinted at previously. The evolution of 20th Century America – from the immigrant-filled ghettos to Prohibition to the rise of Hollywood – serves as a backdrop for the film and, at the same time, works as a metaphor of the lives of the four friends.

It is an incredibly emotional film, touching on major subjects like love, friendship, betrayal, and regret. But it goes deeper. Are you always the person you once were? Should you try to save someone if he doesn’t want to save himself? What is success? Where can you find happiness? These existential questions are the underpinning of the film.

The story is told from the perspective of Noodles, who is played by Robert De Niro, so he is in nearly every scene and he carries the film masterfully. This came at the end of a towering, decade-long run that began in 1973 and included Mean Streets, The Godfather Part II, Taxi Driver, 1900, The Deer Hunter, Raging Bull, and The King of Comedy. He has been nominated for an acting Oscar seven times, but his performance in this film is just as strong as any other in his oeuvre.

But he’s not alone. The rest of the cast brings it too. James Woods brings a conniving depth to his turn as Noodles’s best friend, the smirking, possibly duplicitous Max, constantly making the viewer question his thoughts and motives in what is the best performance of his life. James Hayden and especially William Forsythe are strong supporting players as Patsy and Cockeye, the other two members of the gang.

It’s not just the guys, either. Jennifer Connelly and Elizabeth McGovern both play Deborah with a mixture of moxie and vulnerability and the development of Tuesday Weld’s Carol acts as the yin to Max’s yang. Unlike many films with such tremendous scope, the performances are grounded and realistic. By the end of the film, each character feels not just real, but complicated, the viewer experiencing their joys and pains.

“They forged an empire built on greed, violence, and betrayal”

Leone turned down the opportunity to direct The Godfather to focus on Once Upon a Time in America and though Francis Ford Coppola’s magnum opus would become a piece of Americana, there are those that consider this an even better film than the story of the Corleone family. Leone’s commitment to this project is obvious. There’s not an imperfect shot to be found anywhere. The story unravels slowly and deliberately, but never drags, with the slower, quieter moments often shattered by chaos and violence. It’s both melodic and operatic. As Quentin Tarantino said, “It’s an incredible testament to Sergio Leone’s canvas.”

In addition to the box office disappointment and negative critical response, the re-cut American version also prevented the film from being considered for any major awards. While The Godfather, Goodfellas, and others enjoyed both commercial and critical acclaim, Once Upon a Time in America was D.O.A. upon its arrival in the U.S. On the DVD commentary, James Woods recalled the fact that one critic named it the worst film of 1984, but, upon seeing the cut that had been lauded at Cannes, reconsidered and called it the greatest film of the decade.

“All that we have left now are our memories”

Before the VCR, once a film left the theater, it was rarely seen again. Like Broadway, it was only available that night. That dynamic changed with the advent first of VHS tapes, then premium channels like HBO, and now Netflix, so films that underperform at the box office can find a second life and become cult classics.

But there still needs to be chatter about them. And, until recently, that never happened with Once Upon a Time in America.

The biggest reason, of course, is that the only version available for almost twenty years was the butchered, inartistic U.S. cut. It wasn’t just a box office disappointment, it was an unfinished film. There was no reason for anyone to ever revisit it.

It was not until 2003 that a 229-minute version – the one that became the talk of Cannes two decades earlier – was available on DVD. But it came so late. How many people that were of movie-going age in 1984 realized that this confusing mess of a movie had been saved? Ironically, it did introduce the film to an entirely new generation that had not been aware of – or alive for – the commercial and critical beating it received upon its American release, thus giving it a fresh look.

More recently, Martin Scorsese’s film foundation helped to meticulously restore the original film and even rediscovered scenes that had been cut, the running time now clocking in at 251 minutes. That version of the film was screened at Cannes in 2012 and was introduced by a small reunion of the cast.

Scorsese has said he is working on obtaining the rights to the remaining scenes so that Leone’s original vision of a 269-minute cut can finally be seen, but those scenes are just nice extras.

The 229-minute version that premiered at Cannes in 1984 is virtually perfect, full of beauty, ugliness, happiness, violence, love, and heartbreak.

It’s the greatest gangster epic most people have never seen.