Over the past thirty years, there have been a lot of books written about hip-hop. It seems that any idiot with a laptop has not only written a book on the subject, but also a sequel.

With so many options, where should one start? Should you hit the autobiographies such as those by Russell Simmons (Life and Def), Eminem (The Way I Am), DMX (E.A.R.L.), Prodigy (My Infamous Life), and Common (One Day It’ll All Makes Sense)? Or should you take a more academic approach and examine essays on artists and projects, like Born to Use Mics: Reading Nas’s Illmatic or Jay-Z: Essays on Hip Hop’s Philosopher King, and others? Or maybe just something more straightforward like The Vibe History of Hip Hop? What are must-reads and what can be left on the shelf? As a devout fan of books, I’ve decided to list my favorites here (be advised that I have not read every book ever devoted to the subject and that these are simply the ones from which I derived the most value):

I’m a Wu-Tang fanatic, so I’m biased, but reading this book is what I imagine a conversation with RZA is like. Part autobiography, part spiritual guide, he uses the knowledge he’s gained through both studying and experience to lay out his ideas on life by dropping anecdotes and references that most people were previously unaware. It didn’t make me want to convert to RZAism, but it was a fascinating look into the Wu’s leader, how the group was formed, and the story behind its incredible success and decline.

4. Decoded by Jay-Z (and Dream Hampton)

Jay-Z may be the hip-hop artist that has the most books written about him. While the quality of these range wildly, some are pretty good. Many may choose Zack O’Malley Greenburg’s unauthorized Empire State of Mind, but if you’re familiar with Jay’s story, you know much of those details, so I prefer Decoded. It’s not just an autobiography, but also serves as a history of hip-hop (both written and visually), and includes annotations of Jay’s best lyrics. It is an inside look at the genre’s most successful artist, from his rhymes to his upbringing to the culture. Plus, with striking, glossy photos on virtually every page as well as Andy Warhol’s “Rorschach” on the cover, it is a gorgeous book that can be used as a presentation piece.

3. Book of Rhymes: The Poetics of Hip Hop by Adam Bradley

So many books on the subject focus on everything but the music, which is why Book of Rhymes is so important. Bradley, an English professor, gives rap lyrics the attention they deserve as a form of poetry, explaining the nuance and complexities of the songwriting. Reading this will help you not only become a more attuned listener, but also more appreciative of what the greatest MC’s are really saying. 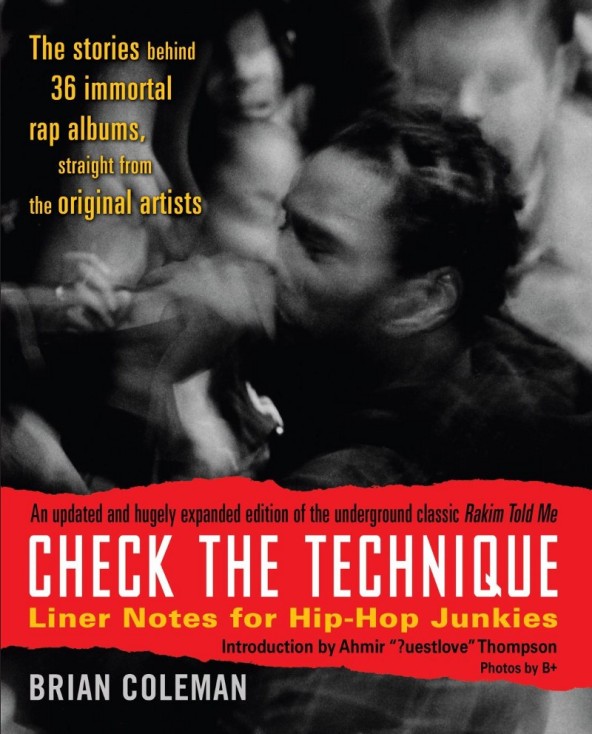 Back in the ’90s, when I was obsessed with hip-hop and buying every CD I could, one of my favorite things in the world was ripping off the packaging and opening the booklet to read the credits and linear notes. I read every CD booklet cover to cover multiple times. In Check the Technique, Coleman takes this to another level by asking the artists directly how they made their classic albums track by track. It is a must read for any rap nerd.

1. The Big Payback: The History of the Business of Hip-Hop by Dan Charnas

The best hip-hop book I’ve ever read, The Big Payback tells the history of hip-hop through the lens of business from the street to the boardroom. Beginning in the ’70s when DJ’s first received cash to rock a party all the way through to the 2000’s when artist-owned record labels and clothing lines raked in hundreds of millions of dollars, Charnas looks at the individuals that made it happen, both positively and negatively, and, in the process, shows how the business affected the music. A great read.

If you love hip-hop and/or want to learn more about it, you really can’t go wrong with any of these titles (and many more) so go pick one up. It will be well worth it.

One reply on “My Five Favorite Hip-Hop Books”

[…] out that hip-hop is a subject that is nearly perfect for a nonfiction film. Last year, I listed my favorite hip-hop books, so this time I decided to anoint my favorite […]