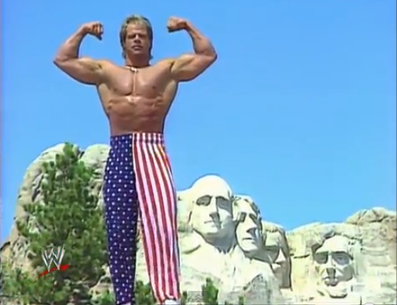 The world if full of tangled, complex issues that need time and cooperation to sort out.

That’s a lot of work and, more importantly, it’s boring. Nuance is hard to convey in 140 characters or in a cable news soundbite. Instead, it’s easier – and more enjoyable – to boil complex issues down to the lowest common denominator in the form of a symbol and then make huge, sweeping generalizations and judgments based on it. Or, if that doesn’t work, have four people come on your show and scream at each other about it for ten minutes.

Instead of focusing on why huge swaths of people feel that there is a fundamental and calculated attempt to keep certain groups oppressed – and investigate if that’s really happening – it’s easier to dismiss their complaints and call their nonviolent protests unpatriotic and ungrateful.

Instead of focusing on a candidate’s platform or merits, it’s easier to obsess over lapel pins.

Patriotism, like freedom, is an abstract concept, something that can’t be proven, so it’s easier to drape yourself in symbolism and rhetoric like they are pieces of flair at Chotchkie’s and then call anyone that doesn’t do the same anti-American. It doesn’t matter if that person served in combat or has a distinguished record – the only way to prove your love of ‘Murica is to show it. The NFL knows this better than anyone – and profits accordingly.

This isn’t a new phenomenon. Winston Churchill said, “A lie gets halfway around the world before the truth has a chance to get its pants on,” but it has become exponentially faster – and worse – in the age of social media, when a story or a meme can reach the farthest corners of the globe almost instantaneously and drive public opinion in the process.

It doesn’t just happen in national or world issues, either.

I’ve encountered these things myself in my own little life.

Instead of judging if I’m a good person based on who I am and what I do every day, it’s easier to decide that I’m not based on a ten-second interaction. Instead of focusing on how I treat my family and friends, it’s easier to make snap judgments based on a facial expression. Instead of appreciating all I do to host you – when I welcome you into my home – it’s easier to get mad at me for not paying attention to you even though I was so busy trying to make everyone comfortable that I scarcely even realized you were there. Instead of trying to understand what someone else is battling, it’s easier to filter it through your own prism and then act emotionally.

All of us deal with this and while we wish things were different, at the same time, almost all of us are guilty of it in some form or another.

I’d suggest that next time we should calm down with the symbolism and actually focus on some shit that actually matters, but that’s too much work. People are tired. They’d rather just watch TV and stare at their phones.