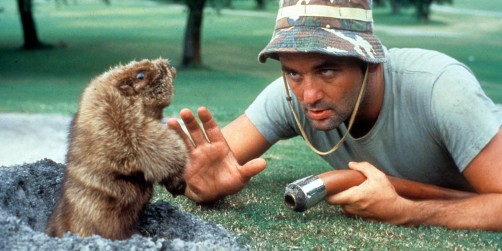 Of all the white male things that I never really got into – Nirvana, soccer, Vineyard Vines, poker, casual racism, blatant sexism – the one that I thought I’d like is golf.

My first job was working at a mini-golf/batting cages/driving range fun center, but while my friends and coworkers loved fucking around and pretending to be Happy Gilmore, I had no interest.

As I got older, I loved watching Tiger on Sunday afternoons while dozing and I always liked the idea of golf – spending a day outside, drinking with friends, tooling around in a golf cart – more than the actual sport. I was always more of a pool hall guy.

I bring all this up because golf is dying and I’m excited for that fact. It’s not because of the wealth and privilege it represents (though that’s certainly a part of it), but because most country club guys are assholes that use the golf course to live out their 1850s southern plantation fantasies. They’re like the male versions of Paula Deen.

Mostly, I look at it through an environmental lens. Golf uses so much land and so much water, during a time when we are rapidly running out of both things, that it’s hard to defend. There are three country clubs within walking distance of my house – maybe that’s why my property taxes are over five figures – and whenever I see them, I think of all the waste it represents. There is an island of plastic trash in the ocean that is at least the size of Texas yet we’re supposed to devote finite resources so that guys can spend five hours on a Sunday morning avoiding their wife and kids and talking about the hot new intern in the office?

Golf can’t die soon enough for me. Put down the clubs and pick up a basketball. Shoot some hoops like a true man.

One additional note – I’ve used a ton of keystrokes recently to talk about Batman (here, here, here, and here – spoilers on the last two) so I won’t do that again, but CNet has a cool feature linking to Google Maps where you can tour Bruce Wayne’s house and the badass Batcave. It’s easy to get lost dicking around on there for a half hour.

Here’s what I wrote this week:

“Golf is a good walk spoiled.”

Have a great weekend!