Last week, I read (with escalating anger) the story of the Kobe Bryant fan who had the foresight to purchase tickets to what will almost certainly be Kobe’s final NBA game, only to later be screwed by StubHub’s greed. (StubHub has since apologized and promised to make things right, but only because of the outcry the company’s original decision caused.)

Like many people that support fairness, it resonated with me for many reasons, but it also hit a bit closer to home because I had a similar experience – minus the screwing – more than a decade ago.

Through sheer luck, I was able to attend Michael Jordan’s final NBA game.

Related: Michael Jordan’s Performance as a Wizard Was Far Better Than You Remember

Like most sports fans of my generation, I was a Michael Jordan fan, but I was more than mere fan. I was a fanatic. I’m not going to engage in a pissing contest – I admit that I was far from the only one and even farther from the biggest one, but I still qualified as a fanatic. I slept in a Michael Jordan sleeping bag. I plastered the walls of bedroom with pictures and photos of him. I owned VHS tapes of not only Come Fly with Me and Michael Jordan’s Playground, but also War of the Stars when he played 1-on-2 against Martin and Charlie Sheen. I spent my allowance on his Fleer, Skybox, and Upper Deck cards and would ask for blank VHS tapes for Christmas so I could record his games. I had seen him play in person several times, including once in the playoffs. To this day, my fandom is still evident in my home office. His 1988 Starting Lineup figure sits on my desk and a few framed photos of him are hung on the wall.

It was December, 2002, and I was attending my first work holiday party, held at the Sheraton on 17th Street in Center City, Philadelphia. At one point in the evening, there was an announcement. Taped to the bottom of one of the seats at each table was a door prize. I happened to be sitting in the lucky chair. I reached under, felt the paper, and ripped it from the chair. Every prize was different and I opened the envelope to see that I had been gifted tickets to two seats in the club box to any regular season Philadelphia 76ers game for the remainder of that season.

I had only been in the job for a few months and was still living with my parents at the the time (#millennial), so when the party ended, I found myself in downtown Philly on a weeknight, drunk, long after the trains had stopped running.

I called a friend, someone who would become my roommate in a year – before we would eventually experience a falling out – and he and the woman that would become his wife scooped me up and drove me the 30 miles back to my car at the train station.

In the midst of my drunken ramblings from the backseat, I announced that as a sign of gratitude for his free Uber service, I would be giving him the other ticket I had just won. He seemed pleased by this, but I’m sure he just wanted me to shut the hell up and get out of his car.

The next day or so, I began reading the fine print from the tickets. They came with restrictions, of course. I noticed that the most popular tickets, like versus the Lakers and Knicks, were not eligible. Understandable. Then, I had a thought. I checked and double-checked and noticed that the Sixers’ final game of the season was on April 16th at home against the Washington Wizards. The Wizards were not normally known for being a hot ticket, so it was on the eligible list.

I was surprised, and excited, to say the least. Only a month earlier, Michael Jordan had announced that he would be retiring for the final time at the end of that season, so unless the Wizards made the playoffs – a possibility but far from a certainty – his visit to Philly in mid-April would be the final time he donned a uniform.

Were they really going to gift me tickets in the club box to the final game of the greatest player in history, the man Larry Bird once called “God disguised as Michael Jordan”? True, he was no longer a deity and there was a pack of young stars that were taking over the NBA, but he was still Michael Jordan. His performance those two years was still very, very good. He still sold newspapers and shoes and, most of all, tickets.

What the hell, I thought. I’d give it a shot. I’d indicate the game I wanted to attend, but I was certain that when they realized the game I chose, they would pull a StubHub, apologize for the mistake, and offer me something else. So I sent the letter (that’s how long ago this was) and waited impatiently.

Weeks later, I received an express mail envelope from the 76ers. I ripped it open and, miraculously, there were two tickets to the Wizards game on April 16. I was excited like I just won the championship.

I immediately became a conflicted fan. I wanted to see MJ do well and drag his team to the playoffs one last time, but I also wanted to be there for his final game. After all, I saw Michael Jordan’s last regular season game just doesn’t have the same ring to it. As spring arrived, it became increasingly clear that Washington would not reach the postseason.

I was really going to be in the building when the GOAT played his final game.

Related: “Hey Jordan, Pick on Someone Your Own Size!”

I refused to get my hopes up. A year earlier he had been a legitimate MVP candidate, but a knee injury had derailed his season – and the Wizards’ playoff chances – and I knew that such a thing could happen again, or that once Washington was officially eliminated from the postseason he would shut it down. I vowed to expect the worst.

On the morning of April 16, I scanned every website I could, and it appeared that he would play. My friend picked me up from work and we drove to the arena. The billboard off I-95 just before the exit to the stadium complex was new:

It was a classy move and, more importantly, it meant that he would indeed be playing that night.

We made our way to our seats in the club box just off half-court and you could feel a buzz in the air. It was a meaningless regular season match-up between the number-two seed in the East and a middling team that had failed to make the postseason, but it had the atmosphere of a big game. There were Jordan jerseys everywhere, an almost equal mix of Bulls and Wizards, and everyone was taking pictures – with cameras! 2003 was a different time. People were still using AOL and AIM. Some people were still using Ask Jeeves as a search engine. There was no Instagram or Twitter or even Facebook, so it wasn’t a crowd of people staring down at their phones, announcing they were at the game instead of actually appreciating the moment.

Just before tip-off, Eric Snow took the microphone and said some gracious things before Sixers legends Moses Malone and Julius Erving drove a golf cart onto the court as a gift to Jordan. Snow handed the mic to Jordan, who said a few words of thanks. During introductions, legendary Bulls announcer Ray Clay announced his name for the final time and the standing ovation lasted for more than two full minutes. The Sixers did a great job celebrating the moment.

The game itself was underwhelming. The Wizards had nothing to play for and had no one that could check Allen Iverson, who was still near his peak (he scored 35 points on 25 shots), so the game was never in doubt. Every time Jordan took a shot, the crowd held its breath and whenever the ball went in, we cheered harder than we did for the home team. His dunk towards the end of the half wasn’t what we once expected from young Mike, but it was still nice to see.

Coming out of halftime, he hit his first two shots, but he couldn’t keep it going and the Sixers soon pulled away. With about four minutes left in the third quarter, Jordan went to the bench. And sat. And sat.

Related: The Fallacy of the LeBron vs. Jordan Finals Argument

The crowd became antsy and by midway through the fourth, it looked like he wasn’t coming back in. We Philly fans weren’t having that:

“The fans did boo, but only when they thought Jordan wasn’t coming back into the game. He went to the bench with 4:13 left in third quarter, and didn’t return until 2:35 remained in the game.

“With the Sixers ahead by 21 points and 9½ minutes left, the chants of ‘We want Mike!’ started. The chant grew louder as the period progressed with Jordan remaining seated, and fans ignored the game to stand and stare at the Wizards’ bench, wondering why Jordan wasn’t playing.”

It’s true. The game on the court became an afterthought as all of us chanted louder and louder, staring at the bench, waiting for any sign that we’d get one final goodbye. There was less than three minutes remaining on the clock and he still hadn’t moved. Maybe he really wasn’t returning. Then, finally, he slowly got to his feet and stiffly walked toward the scorer’s table, removing his warmups as the crowd erupted. 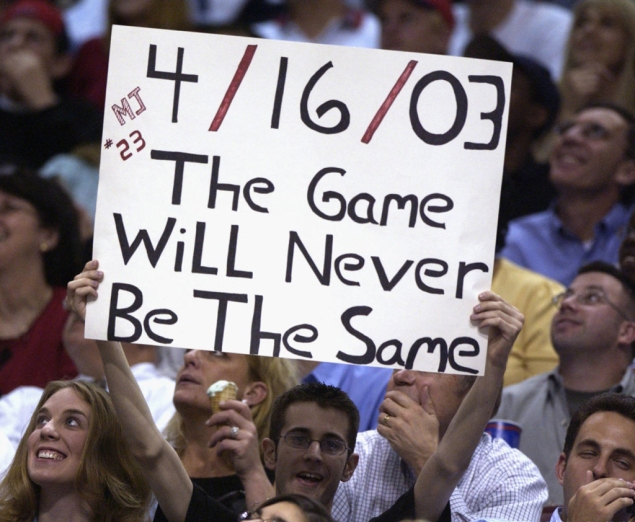 In a classy move, fellow Tar Heel Larry Brown instructed Eric Snow to foul MJ, who then walked to the line and drained two free throws. The Wizards promptly fouled too, allowing Jordan to exit the game properly.

“‘The game didn’t merit me going back in,’ Jordan said. ‘Obviously, they wanted to see me make a couple of baskets. That was very, very respectful.'”

The buzzer soon sounded and it was over.

Among those various pieces of MJ memorabilia in my office is a framed 8 x 10 photo of the final point he scored, a free throw, provided by the 76ers organization. I taped my ticket stub to it and while the years and sunlight have weathered both, they’re still legible. I look at them often.

My list of great sports moments isn’t very long – I’ve never been to a Super Bowl or even a Duke-Carolina game – and the older I get, the less hold sports has over me. But Michael Jordan was my hero. Superman was boring and Hulk Hogan was a buffoon, but Jordan was a god. I watched him mostly through my TV. I wasn’t at the 63-point game or any of his championship wins. I had to watch the Dream Team on tape delay and I never saw him play live anywhere except Philadelphia, but I’m grateful that the Sixers allowed me to see my childhood hero one final time. I can be cynical and cranky, but I was like a giddy little kid all day on April 16, 2003.