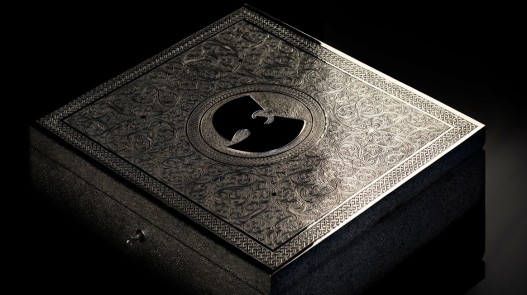 I guess my allegiance to the Wu-Tang Clan is well known because everyone sent me the story about “Pharma Bro” buying their one of a kind double album for $2 million.

I’ve read everything on the subject, from people begging to hear it to hip-hop journalists criticizing a guy for using his own money to buy something he wanted to articles claiming that he was the only buyer.

Regardless of the situation, I’d love to hear it, but I’m not holding out a ton of hope. A Better Tomorrow wasn’t good (although “Crushed Egos,” “Necklace,” and “Ruckus in B Minor” are actually really good songs) and it never could have matched the anticipation, but I’m still not just a Wu completionist, but also a die hard fan. Of course I want to hear it. If the rumors are true that it was recorded over a period of years, then it’s probably dope. That’s enough time for 9 dudes to make 30 good songs. And I like Cilvaringz – I feel like he kept the dusty Wu sound that RZA abandoned years ago.

Speaking of things I loved in my teens, I mentioned last week that I was going to see Jerry Seinfeld live. It did not turn out as expected.

The four of us – my friend, his wife, my wife, and I – had a fabulous dinner at the restaurant down the street from my house. Then, I took them up the hill for an absolutely perfect view of the New York City skyline. Then, we made our way to Newark for the show. I was driving my new SUV, which is about seventeen times larger than my car, and I rolled into the parking garage across from the theater.

The people who had been at the 7 p.m. show were trying to leave and those of us with tickets to the 9:30 show were trying to park so there were cars everywhere. Also, people in North Jersey are horrible drivers with no sense of decency or patience, so that just added to the chaos. I was at point where I needed to tight right turn. So I went. Almost immediately I knew I was in trouble. I hit a wall divider on the right side and scraped and dented it for about a foot. After owning it for less than two weeks, I had fucked up the car.

I felt bad, but what could I do? I didn’t want to miss the show and it’s not like I could get it repaired on a Friday night. So we made our way inside. My wife was understandably pissed, but still kept things relatively in perspective.

We made our way to our seats and I marveled at the venue. I’ve been in quite a few theaters in quite a few cities and NJPAC may be the most beautiful. Our seats were great – we were within the first twenty rows. I settled in, determined to be stoic and not let the car ruin my good time. This was Seinfeld, the dude whose show I had worshiped.

Shortly after the lights went down and the opening act began, I heard it from behind me. The voice of a girl in her late teens or early twenties, one that is used to talking constantly and finding herself fascinating and hilarious at all times. After every joke, she would exclaim, “Oh my God!” or she would call out the answer when the comedian would ask a question as a setup to a joke. It only got worse when Seinfeld took the stage and if he mentioned something from before 2007, she’d loudly turn to her parents (grandparents?) and ask, “Is that really true? Is that how it was?”

I couldn’t concentrate. Between the car and the girl, I was completely out of the mood. I’d watch the show and I’d think, “That’s a funny joke” or “That’s clever,” but I could never disassociate myself enough to enjoy it. Even still, Seinfeld was great. Over an hour of all new material, full of his mastery of language and deconstruction of everyday occurrences. It was a perfect performance.

Unfortunately, I couldn’t enjoy it.

Anyway, here’s what I published this week:

“What RZA put together let no man tear asunder.”

See ya on Monday!