LL Cool J has had one of the longest, greatest, and most complicated careers in hip-hop history. As I wrote on the 30th anniversary of his debut album: “His first twelve albums all went gold or better, with seven of the first eight going platinum. He’s had nine albums reach the top ten of the Billboard 200. He’s had four platinum and six gold singles with six top ten hits on the Billboard Hot 100 and two more as a featured artist. His albums have been in the top 25 on the Billboard 200 chart in four different decades and have gone platinum in three different decades. He’s been nominated for nine Grammy awards, of which he won two, and also received the MTV Video Vanguard Award. He’s a legend.“

But his track record is far from flawless. While it appears that the game has passed him by for good, Uncle L had some duds even in his prime. The most egregious came in 1993 with 14 Shots to the Dome. After the misstep that was 1989’s Walking with a Panther, LL came back with a vengeance and reclaimed his spot the following year with Mama Said Knock You Out.

Over the next three years, however, the landscape would shift. Dr. Dre birthed an empire built on G-Funk with The Chronic and his protégé, a hungry young pup named Snoop, was prepping the most anticipated hip-hop album in history while the debuts of Wu-Tang Clan, Nas and The Notorious B.I.G. were just around the corner, L decided to switch up his style and become a G. He traded the leather top hat for a White Sox cap and displayed an ice grill for the album cover.

Although the reviews were favorable, the public wasn’t buying it. Once again, LL was on the outside looking in before going back to his rap ballad roots and pulling up a pant leg.

After more than two decades has time been kind to 14 Shots to the Dome? 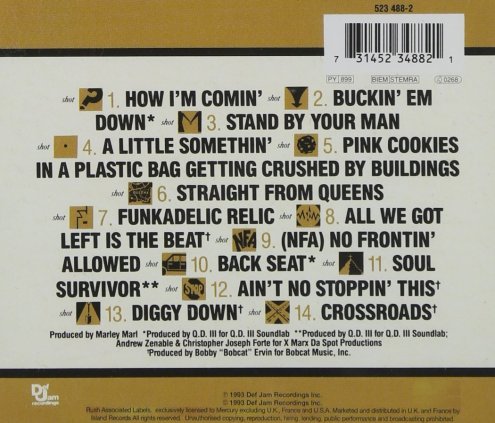 The Death Row influence is obvious from the start on the first track, “How I’m Comin’,” from the sensual background female voices to the repeated vocal sample of “I’m comin’,” which is extremely similar to the “I can feel it” sample Dre employed perfectly on “Deep Cover.”

LL always straddled the line between ladies man and tough guy (even in real life), but here most of the rhymes are almost entirely focused on gunplay to the point of parody. He starts off “Buckin’ Em Down” with:

“Ninety-three comin’ off with the flicks and the rough shit/Packin’ n–s’ kicks with black pits/Saber tooth, the truth, ha-coot! spit the juice/And let the hot-ass lead loose (*gun shots*)/Let it fly, betty-bye if you’re ready to die/Kickin’ your ass and you can ask Keith Sweat ‘Why’/I make your Benz seem obsolete, G/Rippin’ your ass discretely, if you meet me/Puttin’ bullets holes in tents, no fingerprints/You’ll catch a slug in your ass while you jump the fence/Another young black man just caught a case/Not from Tecs or mace, from gettin’ funky like a staircase.”

It doesn’t suit him at all. This is the same guy from “I Need Love” and “Around the Way Girl”? Before, you knew he was from Queens and could handle himself, but here it’s like he’s playing a role…and poorly.

The entire project almost feels like a badly executed homage to hardcore west coast hip-hop (which, I guess, in a way it was). The song titles – “Buckin’ Em Down,” “(NFA) No Frontin’ Allowed,” “Funkadelic Relic” – feel like they were borrowed from a Bay Area underground tape and the beats, largely provided by Marley Marl with a few from QDIII, include James Brown and funk samples and sound like they were recycled from Ice Cube leftovers. If you didn’t know who this artist was – that his previous album had gone triple platinum and won a Grammy, you’d dismiss him as just another new jack trying to jump on the latest trend. Many tried and failed to copy the Death Row formula and it’s sad that LL chose to be one of them.

On a different level, much of the album just doesn’t make sense. On the hook for the aforementioned “Buckin’ Em Down,” L takes aim at such threatening things like landlords, taxes, and bills. Hardcore, indeed. Plus, I must confess that since I was 13 years old, I’ve never understood how “Pink Cookies in a Plastic Bag Getting Crushed by Buildings” is a metaphor for sex. I get the basic gist, but he loses me with the details. If the “plastic bag” refers to safe sex, then shouldn’t the buildings be in the bag? Is he talking about a female condom? Is LL talking about a dental dam?

Aside from packing heat, the subject matter is all over the place, from strong relationships (the somehow Grammy-nominated “Stand By Your Man”) to the apocalypse (“Crossroads”). LL has always been at his best when rapping about sex and the first single, “Back Seat [of My Jeep]” is the album’s best song. He returns to his lip-licking, girl-talking comfort zone with an easy flow over a smooth yet devastating beat. Still, it fails to match his previous (and later) hits and certainly feels out of place in the middle of this disc.

Before Authentic, an argument could have been made that 14 Shots to the Dome is the worst album of LL Cool J’s career. His flow is fine, he brings energy to the mic, and the beats are decent, but it all feels both generic and formulaic. His next album, Mr. Smith, is far from the hardest album in the world and it certainly isn’t perfect, but it’s clear that after 14 Shots, LL chose to finally be himself again. That’s real.

Tha Doggfather | Blood in My Eye | The Best of Both Worlds | Can-I-Bus | Beats, Rhymes and Life | Encore | Immobilarity