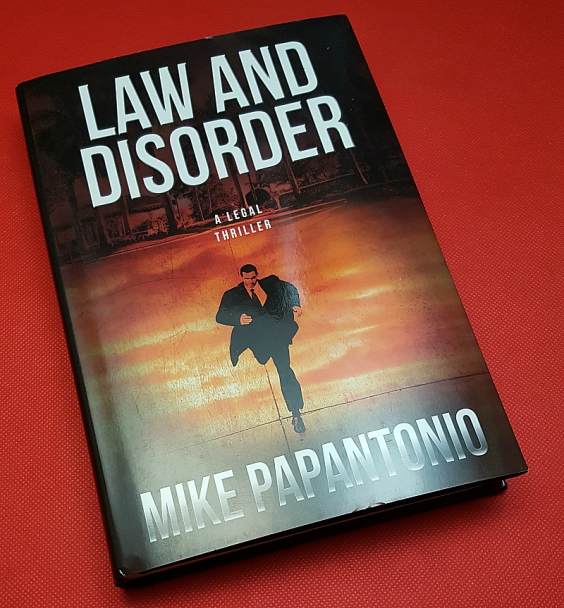 There are very few guarantees in pop culture. It’s hard to know why a seemingly average song becomes a hit or why a can’t-miss film flops.

Despite that, there is one thing that is always true: if something is successful, it will lead to inspiration, imitators, and knockoffs.

It’s not unfair to say that Mike Papantonio’s first novel, Law and Disorder, was inspired by John Grisham. He is mentioned in the the first line on the inside of the book jacket and again in the second blurb on the back. Moreover, the book is billed as a “legal thriller,” the genre which Grisham – and Scott Turow before him – may not have necessarily invented, but certainly perfected.

Of course, the problem is that when you make something look so easy, everyone thinks they can do it. Even Grisham’s bad books,which have certainly increased in recent years, have an ease to them. He can make the pages turn even when nothing is happening. It’s a rare skill that very few of us have and so it’s probably not a great idea to try to emulate him.

Papantonio is a very successful attorney with a nationally syndicated radio show and, by all accounts, an intelligent man. Yet, whether purposeful or not, his fiction writing is quite basic and simplistic. Rather than lay out scenes and scenarios that slowly lead the reader to conclusions about characters and their motivations, he explicitly states them, telling the reader who is “good” and who is “evil,” repeating himself, and overexplaining all aspects of the work. The characters are flat – closer to cardboard cutouts than realistic people – the action scenes are so implausible, and the plot so full of holes that I never was able to get lost in the story.

Returning to Grisham for a moment, the brilliance of The Rainmaker is that the main character, Rudy Baylor, is not Mitch McDeere. He did not go to Harvard or play sports or get seduced by the big law firms. He couldn’t find a job and struggled to pay his bills. Thus, his waging war against a huge insurance company and its silk stocking law firm made for a perfect David versus Goliath duel. That is missing here.

This dichotomy between the two sides never works in Law and Disorder, because the book’s main character, Nicholas “Deke” Deketomis, is smart, handsome, rich, very successful, and adored by everyone around him – they tell him how much they admire him every chance they get. Still, Papantonio tries to portray him as an underdog without a chance when it’s obvious from the start how it’ll all work out for him in the end.

In his brilliant book, On Writing, Stephen King wrote the following:

“People who decide to make a fortune writing like John Grisham or Tom Clancy produce nothing but pale imitations, by and large, because vocabulary is not the same thing as feeling and plot is light-years from the truth as it is understood by the mind and the heart. When you see a novel with ‘In the tradition of (John Grisham/Patricia Cornwell/Mary Higgins Clark/Dean Koontz)’ on the cover, you know you are looking at one of these overcalculated (and likely boring imitations.”

Papantonio doesn’t need to make a fortune from books but if he’s going to continue, he needs to improve. He rarely employs pronouns – pages have the word “Deke” upwards of ten times – he uses far too many flowery adjectives to describe emotions, and he struggles with punctuation, from misusing quotation marks to employing apostrophes to pluralize.

But he’s not hopeless. There are elements of Law and Disorder that are really good, little glimpses of what the book could have been – and what the writer may yet be. In his next attempt, Papantonio should dial down the implausible action and overwrought descriptions and instead focus on more intelligence and intrigue. If he does, he’ll be a far better writer. And a more original one, too.

I was given a free copy of this book in exchange for an honest review.

Christopher Pierznik’s eight books are available in paperback and Kindle. His work has appeared on XXL, Cuepoint, Business Insider, The Cauldron, Medium, Fatherly, Hip Hop Golden Age, and many more. Subscribe to his monthly reading review newsletter or follow him on Facebook or Twitter.